After studying law at Saarland University in Saarbrücken and his time in the German Armed Forces as a paratrooper, Heinz König worked as a general representative of a medium-sized group of companies in the fields of engineering and telecommunications expansion, then in key positions at VIAG Munich and Bayernwerk NETKOM. In 1999 he founded carrier 24 GmbH, the second largest alternative network operator for telecommunications services in Germany. After selling his shares, he was a member of the executive committee of the listed company Energis plc. in London until the end of 2001 and was responsible for Germany as Managing Director.

In 2002 he founded the medium-sized corporate group Customer Company and led it as Managing Partner. In 2009 the business activities in the consulting division were consolidated in Sofis AG. In addition, he holds significant stakes in other companies – mainly in technically oriented market segments.

Heinz König is socially active in a variety of ways as the chairman of a business association for small and medium-sized businesses and in sport as the co-founder of a foundation. Since 2017 he has also been Vice President of Economics of the German Athletics Association (Deutschen Leichtathletik-Verband). 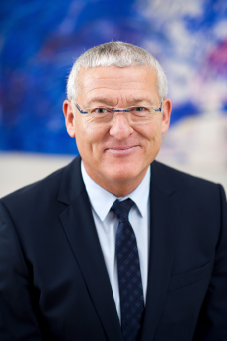 By continuing to use the site, you agree to the use of cookies. Further information Weitere Informationen